The City Hall building is closed, email our Customer Service team at customerservice@sarnia.ca, or use the online form: https://www.sarnia.ca/comment/. Staff will respond during business hours. See our COVID-19 page for updates.

The City of Sarnia has over 90 parks and over 1000 acres of parkland!

Designated picnic site areas are available to the public at no charge, on a first-come, first-served basis if not already reserved/booked. However, if you wish to ensure you have a site, it is in your best interest to book a site and obtain a permit by paying the applicable booking fees. View more information below, designated by location.

Physical distancing measures and group size limitations as set by the Province remain in place.

Picnic shelters are currently not bookable until further notice. Rentals are scheduled to open for booking starting June 1, 2021, however this may be re-evaluated prior to this date.

Blackwell Park is home to two baseball diamonds and the Pickleball Hub which features six pickleball courts.  A picnic shelter is located beside pickleball courts to escape from the sun between games.

Sarnia’s Canatara Park sandy beaches stretch nearly a kilometer along the shore of Lake Huron near the mouth of the St. Clair River. This is one of only 27 in Canada to have earned official Blue Flag status for its commitment to strict water quality and safety criteria. The beach also features mats to make the beach more accessible to people using wheelchairs or strollers.

For more information, or to book a spot in one of picnic areas, please contact Parks & Recreation at 519-332-0330 Ext. 3211 or parksandrecreation@sarnia.ca.

Centennial Park features award winning floral gardens, a children’s play area, Court of Flags, walking trails, recreation and entertainment area all maintained by the city’s parks and recreation department. The waterfront park is a popular venue for numerous sporting events, concerts and festivals. Every winter the park is illuminated with thousands of colourful lights for the Celebration of Lights Christmas event.Please visit here for more information on the Point Lands Cremated Ashes Scattering Site

Germain Park is an 60+ acre park with something for everyone. Tennis/pickleball courts, baseball diamonds, and soccer fields, playground equipment, an outdoor stage, which is often used for our Summer Entertainment Series, and winding walking trails through a beautiful garden area. Germain Park is also home to an off-leash dog park, the Sarnia Lawn Bowling Club and community garden plots. The Golden Hawk memorial for WWII airmen is located at the East St. entrance of the park. Parking is available at three park entrances- Germain St., Bright St. and East St.

Check out the article below, written by Barbara Simpson of The Observer to learn more about the gardens in Germain Park!

Build it and a Buddhist priest will come.

That’s the mantra Patti Ross could adopt these days after the city’s new Japanese meditation garden has attracted a Sarnia Buddhist priest to practise in the space daily.

Inspired by meditation garden in other cities, the city’s forestry and public works departments started work two years ago on Sarnia’s own version, located just west of the Germain Park archway on East Street.

But city staff weren’t sure the new space was appreciated until Ross, the city’s chief arborist, had a chance meeting with Buddhist Priest Richard Maxwell when he stopped by her office.

“He said, ‘I want to speak to who’s in charge of this,’ and so I came out and met a Buddhist priest, so there’s my motto: ‘Build it and they will come,’” Ross said Tuesday.

Maxwell and other local residents use the space featuring Japanese trees and plants, a Zen garden and a recently-added granite water feature as a serene backdrop for their daily meditation practices.

Maxwell spoke about the garden’s features and demonstrated his meditation practice to Communities in Bloom judges Tuesday morning.

Toth was responsible for designing the meditation garden – the very first one he’s done – at the site formerly used as a wedding venue.

The Zen garden features five rocks – meant to represent Japan’s five islands – surrounded by gravel raked in a pattern to mimic ripples in the water.

Visitors are greeted by a traditional Japanese lantern where they will typically bow before they continue on into the space.

Maxwell has volunteered his time to help maintain the Zen garden, Toth added, noting the Buddhist priest built his own traditional rake for the job.

For Maxwell, the new Sarnia meditation garden is “it” – the embodiment of what he experienced during his time in Japan.

While he isn’t sure how many practising Buddhists there are in Sarnia, Maxwell, who was ordained as a priest two years ago, has met locals using the meditation space who travel to Port Huron and London to be part of Buddhist communities there.

He belongs to a 300-member global Buddhist community online, with members located in Germany and Sweden through to Spain and Argentina.

But, Maxwell said, Sarnia’s new meditation garden is pulling more people together – some just out of curiousity – when they come across it during a walk in Germain Park.

“There’s more and more [people using it] because now with the water feature, they don’t walk past it,” he said.

After Tuesday’s visit to the meditation garden, Communities in Bloom judges were headed off to visit the rest of Germain Park and Camp Saredaca as part of their four-day visit ending Wednesday.

Located across the street from the lakefront in Bright’s Grove, Kenwick on the Lake offers a covered pavilion and a wedding gazebo for rent, multiuse courts for tennis or pickleball, a playground and washrooms facilities.  Seasonally, there is a fry truck located on the property.COVERED PAVILION/GAZEBO 8 tables (three 12’ and five 6’ tables) 2 BBQ Pits Hydro available Pavilion Capacity = 100Daily Rental Fee: $63.00+tax plus $2.70 liability insurance

For more information, or to book a picnic or wedding, please contact Parks & Recreation at 519-332-0330 Ext. 3211 or parksandrecreation@sarnia.ca. 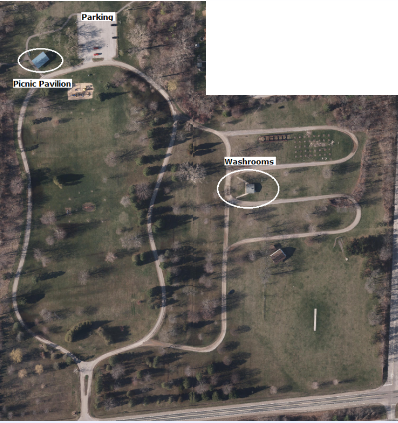 Mike Weir Park, named for Sarnia’s famous golfer, is a beachfront park located in Bright’s Grove. It features a large sports field, a play area and jungle gym for kids, and a sheltered picnic area. Plenty of treed areas for shade in the summertime.COVERED PAVILION20 tablesHydro is available *Long walk to washrooms, not accessible Pavilion Capacity = 100-150 people Daily Rental Fee: $63.00+tax plus $2.70 liability insuranceFor more information, or to book a picnic or wedding, please contact Parks & Recreation at 519-332-0330 Ext. 3211 or parksandrecreation@sarnia.ca.

Newton Park is a beautiful green space at the corner of Mccrie and Cathcart with a playground, sportsfield, basketball court and home to the Newton Centre- an indoor facility with a covered outdoor picnic area attached.

Check out the article below, written by Randy Evans and Gary Schrumm of The Sarnia Journal to learn more about Newton Park’s unique history and how it came to be!

Newton Park in north-end Sarnia would likely not exist today, but for the presence of a troublesome ditch.
The baby boom was on in the 1950s, and to meet the growing demand housing plans were drawn up for new subdivisions. Under city policy, developers had to dedicate land for neighbourhood parks.
One area slated for new homes was a large block bounded by Indian, Murphy and Errol roads, and to the north by Cathcart Boulevard.
Records show the original plan called for Beverley Road to start at Indian Road and proceed all the way east to Murphy. That road would have bisected what is now Newton Park, then continued along what today is Gurd Street.
In 1954-55, the Kemsley family began to develop McCrie Street and the lands east to Murphy Road. Included were two large lots between McCrie and Miller Drive, which were deeded to the city, apparently for parkland.
In 1954, Kember Construction laid out the first part of Beverley Road, starting at Indian and ending at what is now the west end of Newton Park. A second subdivision plan to complete the job was prepared and approved by city council on July 4, 1955.
But the approval was conditional on the company closing up a drainage ditch that ran through the property, and apparently that had become a problem.
John C. Kember went back to council that September with a proposed land swap: He’d give the city the ditch and surrounding 6.3 acres for a park, and in return be given the proposed park lots to the east in the Kemsley subdivision.
Just 13 days later council agreed, and in a deed dated Jan. 10, 1956 the city took ownership of the land that became Newton Park.
The park is believed to have taken its name from Jack Newton. His long and impressive resume includes a Grey Cup championship, First World War recipient of the Military Cross, Sarnia Imperials and member of the Sarnia Parks Board.
For decades, Newton Park and its community centre served residents well, providing open space for walking, football, baseball, activities for the kids on summer break (once supervised), swings, slides, and even checkers competitions.
But over the past decade depressions have appeared as the ground sinks in places. The city has responded the past few years by trucking in soil to fill in the receding areas, and it’s hoped that better days are still ahead for Newton Park.